Labor of Love: Billy Williamson and the UT Health Science Center at Tyler 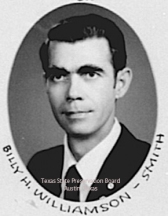 The late Billy Houston Williamson, Sr. represented Smith County in the Texas House of Representatives from 1965-1975. He was renowned as a man of quick wit and good humor, whose unflinching dedication to his Conservative Democrat values often put him at odds with his peers. Inspired to run for office by the assassination of President John F. Kennedy only 90 minutes away from his adopted home in Tyler, Texas, Billy Williamson served during one of the most tumultuous periods of Texas political history.

Among other things, he was a vocal participant in the debate over liquor regulations in the early 1970s; a witness to the rise of the “Dirty Thirty” representatives who took down Speaker of the House Gus Mutscher; a delegate to the infamous 1974 Constitutional Convention; and a key player in both the redistricting of Texas state legislative districts and the reform of public school financing laws. Rep Williamson was also responsible for the installation of the Tyler Rose Garden on the State Capitol grounds in Austin, Texas. 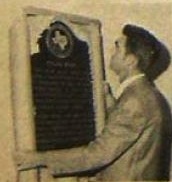 Mr. Williamson left an indelible legacy upon his district. While his legislative contributions towards the creation of the University of Texas at Tyler were recently highlighted during UT Tyler’s 40th anniversary celebration, few people are aware of Mr. Williamson’s involvement with another influential Tyler institution: The University of Texas Health Science Center at Tyler.

UTHSCT began as a military hospital at Camp Fannin, a World War II infantry-training base and prisoner of war camp in Tyler, Texas. After the war, it was chartered as a sanatorium for tuberculosis patients. The East Texas Tuberculosis Hospital had special significance for Rep. Billy Williamson. His mother had contracted TB in 1939, spending two years undergoing treatment at the Louisiana Tuberculosis Hospital. (“Williamson Oral History”, Billy Williamson Papers, University Archives and Special Collections, Box 1 Folder 1, p. 2 )

Mr. Williamson wrote to Governor John Connally that he had “a very keen intereset in our state tuberculosis program”. In another letter to Edwin Rasco of Citziens First National Bank, Mr. Williamson wrote “you can be assured that I am vitally interested in tuberculosis – its detection, treatment and prevention and would consider it a great pleasure to work with the Smith County Tuberculosis Association in their efforts to this end.” (“3691 –Tuberculosis, Texas Association of”, Billy Williamson Papers, Box 46 Folder 1)

During the 60th Legislative session, Rep. Williamson introduced HB 921, “relating to the establishment of a medical branch of the University of Texas in the city of Tyler, Smith County, Texas, to be known as the University of Texas Medical School of Tyler”. This was the first serious mention of  a medical center in Tyler. Mr. Williamson would later testify that he had little confidence in the bill itself; he intended it as “a sales gimmick to help sell Tyler to the legislature and sell the people of Tyler on the idea that things could be a whole lot better”. (Williamson Oral History, p. 26) However, the response in Tyler was so favorable that he decided to pursue the idea in earnest, as a companion measure to his dream of bringing an upper-division university to East Texas.

During the 61st regular session, Rep. Williamson introduced HB 833, “relating to a pilot program to treat persons with various respiratory diseases at the East Texas Tuberculosis Hospital”. The bill passed unanimously in both the House and Senate in May 1969, allowing the TB hospital to offer treatment for other chronic pulmonary diseases to a small number of medically indigent Texas residents. The pilot program was a success.

Gov Preston Smith congratulates Rep Williamson on the passage of his bill to expand the T.B. hospital in Tyler to treat all respiratory diseases {Tyler Morning Telegraph}

In 1977, Senator Peyton McKnight of Tyler sponsored the bill which transferred control of  the East Texas Chest Hospital to the University of Texas Board of Regents, bringing to life Billy Williamson’s dream of a medical school in Tyler. In addition to offering its own degree programs, UTHCT partners with UT Tyler to provide clinical training and medical care for UT Tyler students , staff, and faculty. Today, the University of Texas Health Science Center at Tyler consistently ranks among the top hospitals in the nation for pulmonary care. It has also received multiple awards for its groundbreaking research on and treatment of pulmonary diseases. (Learn more about the history of UTHCT)

After retiring from the legislature in 1975, Mr. Williamson was appointed as a county judge in Smith County. He succumbed to adrenal cancer on May 26, 1982 at the age of 54, after two years of treatment. (See House Concurrent Resolution No. 19, in memory of Billy H. Williamson) Mr. Williamson spent his final days at UT Health Science Center at Tyler, the institution which he helped transform from a small tuberculosis clinic to a nationally acclaimed hospital and medical teaching facility.